Qarajouli and teammate Horst Felix Felbermayr locked out the top two positions throughout free practice, and the former duly went on to secure pole for both races while the latter qualified on row two of the grid.

In the first part of the Imola Heat, Qarajouli and second-placed Cédric  Oltramare initially made a break as Felbermayr breached the podium places.

However, Qarajouli found an extra gear and built a significant advantage, only for two Safety Cars to reset the gaps on the run to the compulsory pit stops.

Beautifully executed restarts enabled the Kuwait teenager to surge away, but the extra 20 seconds he was obliged to serve in the pits as a Silver-graded driver meant he emerged from the pit window in second, directly ahead of Felbermayr.

Qarajouli retook the initiative in a clean pass on M Racing’s Laurent Millara at Tamburello, but Felbermayr’s attempt to snatch P2 resulted in contact and a 30-second time penalty that resigned him to third.

In race two, poleman Qarajouli and Felbermayr made it an RLR MSport one-two at the head of the Ligier JS2 R pack, the former building a ten-second gap as the latter came under increasing pressure from behind.

Unfortunately, a long delay in the pits cost Felbermayr several positions and put him a lap down on  RLR MSport teammate Qarajouli, who maintained an indomitable lead to take three wins from four races in the Ligier European Series.

“I only started racing at the age of 15 in Ginetta Juniors and this is only my debut season in the Ligier European Series, so I try to go into every race weekend with no expectations,” said Qarajouli. “I prepare as much as possible on simulators, but, while I felt I had a good grasp of Imola before I arrived in Italy, I knew there would be a lot of work to do in free practice.

“Imola is an old-school and technically challenging track, which I really enjoy. After free practice, I was confident I had the speed to challenge for pole position and convert them into victories. In both races, I got great starts and just got my head down, but Safety Cars eroded my gains. Tyre management was critical in the high temperatures, but it was all very positive and the car felt great. All-in-all, I’m really happy with the weekend. I couldn’t have asked for more support from RLR MSport, and I’m also thankful to my sponsors and partners. I now have a full week of college exams ahead of me, which was always on my mind at Imola.”

Felbermayr said: “The first race was great and to finish on the podium again is exactly what I hoped for, although it’s frustrating to have lost out on second place. I was fighting hard with Laurent (Millara) and he left a few metres on the inside at Rivazza after making a mistake at the previous chicane, so I went for the gap and we made contact. I spoke with Laurent and we both agree it was a racing incident and, while it’s frustrating to have lost a P2 result, I’ve accepted that there’s nothing I can do to change the stewards’ decision. Unfortunately, an issue in the pits put me out of position in eighth in race two, but I’m satisfied with the weekend, as there was some great racing and I learnt a lot.”

RLR MSport fared less well in the Le Mans Cup, as Martin Rich and Tommy Foster finished a lowly 19th at the end of the stop/start, incident-packed Imola Round (13-14 May).

British Bronze Rich, said: “I can take a lot of positives away from Imola, because I’m very happy with my overall pace. Qualifying was slightly frustrating because I completed my best lap two seconds after the red flags came out and invalidated the time that would have put us much further up the grid. In the race, I made steady progress through the carnage to be eighth at the pit window, which is exactly what I wanted to achieve because it gave us a good stab at a podium with Tommy (Foster) in the car.

“Unfortunately, a decision to stay out a lap longer than everyone else under the Safety Car put us a lap down on the leaders, and it was ultimately game over for a good result. It’s disappointing but we can certainly feel positive about our pace and the fact we had a good chance of achieving our second podium in as many races. I’ll go into the ‘Road to Le Mans’ races with the aim of returning to the rostrum. I love Circuit de la Sarthe and the atmosphere of the 24 Hours of Le Mans, and it’s such a wonderful opportunity to compete there.” 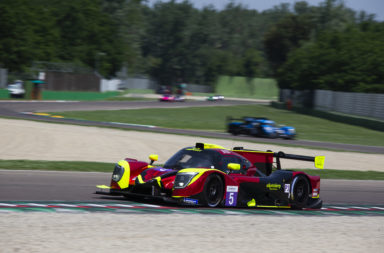