As ever, the Le Mans Cup has prime positions on the support bill for the 24 Hours of Le Mans, with the second of two 120-minute races to be held immediately before the start of the headlining twice-around-the-clock enduro on Saturday 21 August.

RLR MSport has podium form in the Michelin Le Mans Cup’s blue riband event, as returning pair Kapadia and Rich took the team to third place during the first year of LMP3 in 2017, but Switzerland-based Benham has himself scaled the ‘Road to Le Mans’ rostrum on multiple occasions, most notably in celebration of a victory in 2018.

This year, Benham opened the Le Mans Cup season with a win in Barcelona, where he, Kapadia and Jakobsen also stood on the ELMS podium, and there’s hope of more success for RLR MSport in front of the enthusiastic Le Mans fans, who were conspicuous by their absence in 2020.

“I’ve raced at Circuit de la Sarthe a few times now and I’ve never been off the podium in Saturday’s Michelin Le Mans Cup ‘Road to Le Mans’ races,” said Benham. “Malthe (Jakobsen) and I should be in good shape, and while we will need a bit of luck, we have a great chance of reaching the rostrum.

“The Le Mans circuit is very unique, and it requires a setup that enables you to achieve high top speeds on the Mulsanne Straight and high cornering speeds through the Porsche Curves and Indianapolis – possibly the most exciting and ballsy sequence of corners on the calendar. RLR MSport is adept at trimming the car out to achieve a strong low downforce setup, and I take confidence from the fact the team ran spectacular races with Malthe in 2020 and it’s a circuit I’ve always clicked with.”

Jakobsen said: “I’m super excited about returning to Le Mans because I really enjoy Circuit de la Sarthe. It’s the best track I’ve ever raced on and competing there as a 16-year-old was unreal – I enjoyed every second of the experience. The fact the week went really well, our lap times were fast and the results were good added to the enjoyment, and I think we have a real opportunity to go better than sixth this time around. The podium is certainly achievable with Mike (Benham) alongside me, as he has a lot of experience at Circuit de la Sarthe and that counts for a lot because you’re unable to test there.

“Standing on the Le Mans rostrum is a dream, even if we aren’t competing in the 24 Hours of Le Mans itself, and I’m expecting the whole event to be so much better with crowds filling the grandstands and lining the track because the spectators were dearly missed in 2020.”

Rich said: “Interestingly, Alex (Kapadia) and I have now raced together on four occasions – twice at Le Mans and twice in the Masters Endurance Legends at Brands Hatch – and we’ve only finished off the podium once, and that’s because we were taken out. It’s a nice record and a great partnership, and the fact I reached the ‘Road to Le Mans’ podium in my first ever prototype race in 2017 bodes well now I have a lot more LMP experience, including a full season in the ELMS.

“I feel much better driving the car, and while I understand the series and competition have moved on, we’re definitely going for a podium. RLR MSport is a great team that’s currently in a good place and Alex is a fantastic driver and coach. I suspect both RLR MSport cars will be in the fight, which would be lovely for the team.”

Kapadia added: “Martin (Rich) and I have been successful as a pairing in different categories – it has been a pretty good partnership – and we’re certainly going back into the Michelin Le Mans Cup to win. There’s always a bit of luck involved and I’m conscious of the fact there is a ‘win it or spin it’ element to ‘Road to Le Mans’, but we’ve been putting a lot of effort into our preparations, working together on the simulator, because the field is sure to be super competitive. It will all be about how we execute on the day.

“The field is as competitive as it has ever been and there are potentially ten line-ups capable of winning the races, so we will have to be at the top of our game at every moment and take every opportunity. I’m looking forward to it – we have good pace at Le Mans and the car is feeling strong – and we really want to be on the podium in Saturday’s race when the grandstands and spectator banks will be at their fullest before the 24 Hours of Le Mans.” 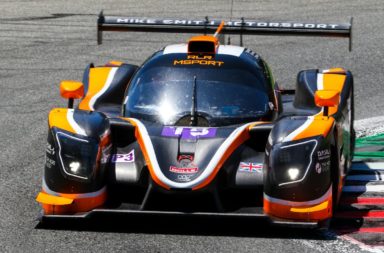