The Motul-powered squad led the LMP3 category for a time but fell out of contention when it was forced to repair a regulation part, damaged by rear-end contact from a class rival.

Denmark’s Jakobsen took RLR MSport to sixth in the hotly contested ELMS LMP3 Qualifying session on Saturday (10 July) afternoon, and British Am Benham then went on to make up a spot on lap one of the race proper.

Unfortunately, Benham’s grip on fifth was short-lived, but RLR MSport made big gains in the pits, initially rising from eighth to second place before inheriting P1 in class, and then saving more time by swapping out Benham for Kapadia during a Full Course Yellow (FCY).

However, RLR MSport fell out of the top ten during a protracted repair stop ordered by Race Control, although both Kapadia and Danish teenager Jakobsen deployed class-leading pace in spite of compromised aerodynamics and mustered a ninth-place result.

“We worked on our race pace the whole way through the weekend, but it’s a shame we never really had an opportunity to show it,” said Kapadia. “Mike (Benham) was hit up the rear and took light damage at the first chicane but had a really good stint. Unfortunately, we were summoned into the pits for repairs and that 3m14s stop cost us an almost guaranteed second place result. An LMP2 car also took off a dive plane and the car wasn’t quite right after that, but, while the pace wasn’t as strong as it could have been, Malthe (Jakobsen) and I drove well. Once again, we’re left wanting a clean race. It’s frustrating, and missing out on a podium would be easier to take if we made mistakes, but the problems weren’t of our own making.”

Jakobsen said: “It’s so annoying that, once again, someone ran into us. We lost two laps while repairing the damage and that took us out of podium contention, which is highly frustrating, especially when you consider our pace and that we led the race. Mike ran with damage for much of his stint but was still fast, and the same can be said of me and Alex (Kapadia) after losing both front-end dive planes. I managed to drive pretty well and I was the second fastest driver on-track in the final stint, so we undoubtedly had the pace to comfortably finish on the podium.”

Elsewhere in the Michelin Le Mans Cup, Benham and Tommy Foster lingered on the cusp of the top ten during much of the build-up to the series’ Monza Round, but the former managed to edge into the top six during Saturday’s red flag-affected qualifying session.

From the third row of the grid, Benham kept his nose clean and emerged from the first pinch point at Variante del Rettifilo still in sixth but under threat from the #12 Black Falcon machine, which forced an error under braking for Variante della Roggia on lap two.

However, RLR MSport burned one of its mandatory timed stops during a protracted Safety Car and, having dropped to 25th overall, Benham calmly made his way back up the leaderboard before pitting again during a second neutralisation.

Benham slotted into 20th in the Safety Car train but was himself the cause of a FCY after losing control of and beaching the #15 Ligier JSP320 in the gravel on the entry to the Parabolica.

Mercifully, the RLR MSport machine was retrieved from the gravel and Foster had his chance in the cockpit, the young Brit going on to record personal best lap times in a determined effort to reduce his three-lap deficit to the race leaders, ultimately finishing 21st overall and 16th in LMP3.

Foster said: “I was really confident with the car and the RLR MSport team, which did a great job throughout the weekend. The moment I jumped in the car in Thursday testing I could tell it was strong, and we only made fine adjustments to get the absolute best out of it. On Saturday, I found the car was perfect and I was the second fastest driver overall in my race stint. Of course, most people will only see the end result, which is frustrating, but I’m very happy with my performance and I feel I did myself justice.” 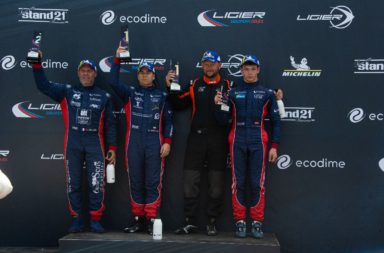